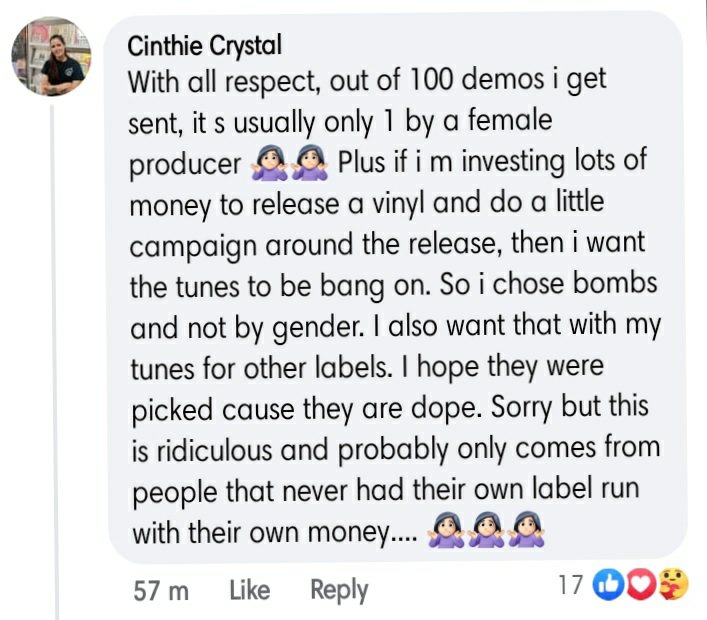 During the pandemic, Rebekah Teasdale seems to have developed something of a taste for campaigning for things to change. Unfortunately, she’s forgotten about the getting things to actually change bit – hence why the potentially brilliant #ForTheMusic movement remains rudderless.

Now it appears she’s decided to join another campaign – 23×23. And the idea behind this is simple. They want record labels to sign up to a pledge that 23% of their releases will be by women by the end of 2023. To the best of my knowledge, there are no industry wide figures available on this subject – but labels like Toolroom, Soma and Rules Don’t Apply are said to be on board.

As ever, this has all been dutifully reported by the dance music press who fail to point out one rather big central problem with the whole idea. Namely that it’s complete rubbish with nothing to enforce it. So allow me to elaborate.

Now, this blog is entirely in favour of more women making dance music. But I’m also the sort of person who believes if there’s a problem, you should do something yourself to fix it. Judging by what I’ve read, Sydney Blu and Rebekah subscribe to the Homer Simpson school of “Can’t someone else do it?”.

Why can’t they set up their own record label and show how it’s done? Instead of expecting everyone else to do the heavy lifting, create your own path which others can follow. Rebekah has a substantial following in techno and Sydney Blu does too. They could be trailblazers, yet they want largely male-led labels to do all the work. Hardly a progressive philosophy.

Speaking of which, what happens if any of these labels fail to keep to the pledge? Are they going to get called out by the dance music press? We already know the answer to this question is a big fat no. Will they be fined? And what kind of contracts will they sign? Because you could have a label with 100% women but with 0% ownership of their music, that’s simply no good.

The final word on this, though, has to go to Cinthie Crystal – a DJ and producer with far more experience than me who just happens to be a woman. Here was what she said about the whole thing…

I don’t think they can count on her support somehow…